Stay updated with news re: Yang Law Offices on our social media pages:

Lawyer Explains What Mass Tort Is All About


Attorney Reveals A Little-Known Secret About Becoming An Attorney


How Do Attorneys Get Their Clients


Attorney Discusses Problems That Can Arise In Custody Cases


How Technology Helped My Marketing Succeed


Divorce Attorney Really Doesn’t Want Anybody To Get Divorce


In Case of Divorce Who Gets Custody Of The Kids? Attorney Provides Information


Attorney Discusses Advantages of Couples Having A Prenuptial Agreement 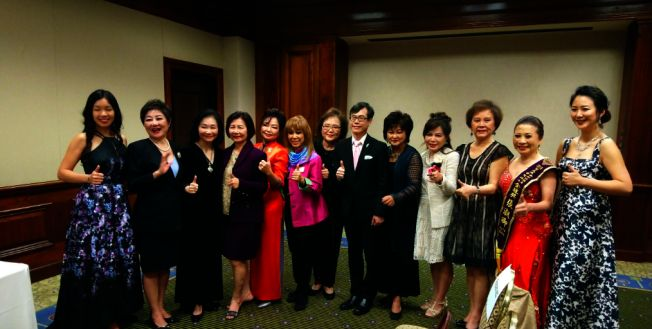 The five outstanding women who won this time are all industry leaders. Five winners were selected after four stages of preliminary review, review, interview and final review. The jury is composed of celebrities from the “industry, government, law, and academia” circles, including Weng Guitang, deputy director of the Taipei Economic and Cultural Office and director of the Luoqiao Center in Los Angeles, Wang Tinghuan, head of the economics team of the Economic and Cultural Studies Department, and national policy advisor to the Presidential Palace Tian Yihong, Los Angeles World Daily director Yu Chiqin, lawyer Du Huili, etc. 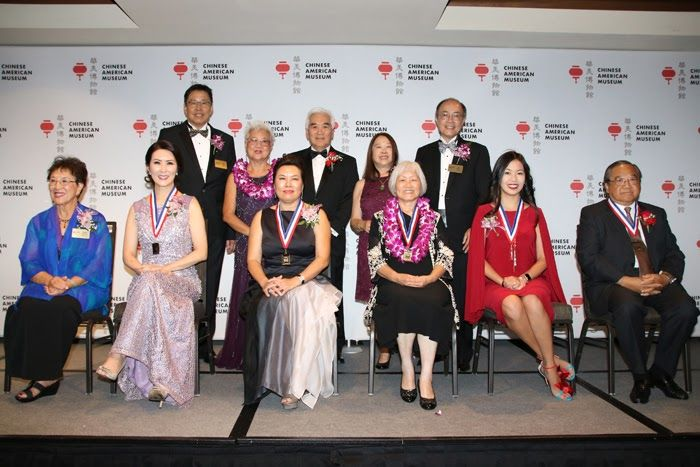 [Los Angeles News] On August 20th, the Friends of the Huamei Museum grandly announced the list of five ladies and a non-profit organization that have been praised as “The Founder of History” this year at Chinatown Fulin Restaurant. They are outstanding for the mainstream American and Chinese communities. Contribution and impact. Relevant winners will be invited to attend the “23rd Annual History Builder Awards” Gala held at the Penafanchu Hotel in Los Angeles on Thursday, September 19th at 6:30 pm, accepting the awards presented by the conference; this year’s gala The theme is “Extending Life, Sharing History.” 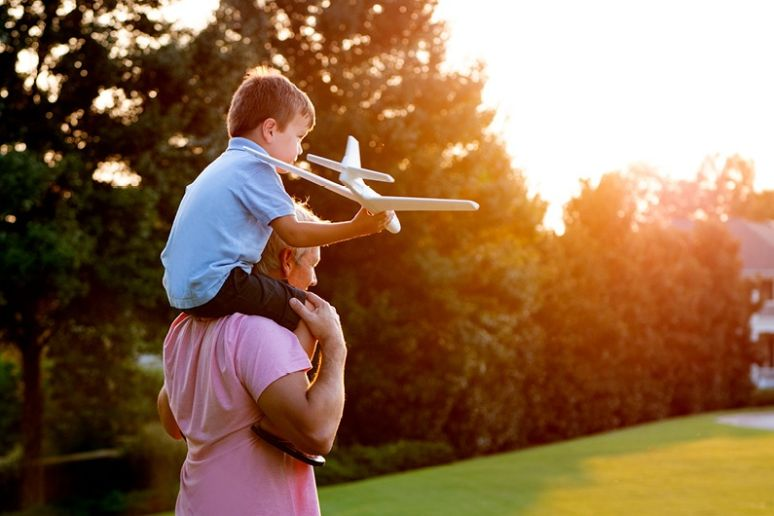 Here’s How to Co-Parent During Summer Vacation 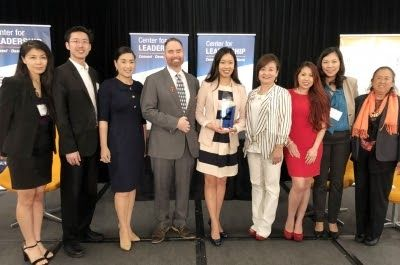 The 2019 Executive Excellence Awards Awards Luncheon was recently held at Hotel Irvin in Orange County. Attorney Elizabeth Yang, JD Patent Attorney accepted the awards. Attorney Yang won the Award for Excellence in Executive Leadership and the top 40 American lawyers. The following Outstanding Lawyer Awards (see Figure 5th from the right), Orange County Leaders Honored at Center Director Jay Barbuto (see Figure 4th from the left) hosted the awards luncheon and participated in the gala full of outstanding alumni, teachers and students of the Cal State Fullerton’s Mihaylo School of Business and Economics and 300 A number of professionals from all walks of life participated in the awards, and the awards were sponsored by 28 companies and guilds. 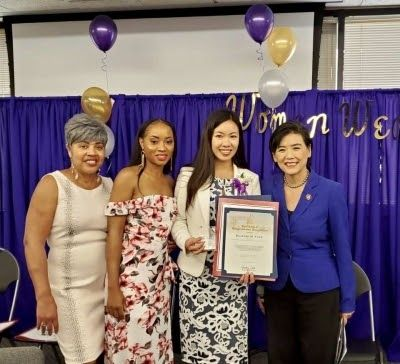 WomenWealthWarriors.Org holds the 10th Annual Luncheon and Awards Luncheon. The organization was founded by Tunisia Offray (see second from left). She is committed to empowering mainstream American society and supporting women-owned businesses. Attorney Elizabeth Yang (pictured second from the right) won the Outstanding Lawyer of the Year Award and the Top 10% Attorney in US award, and accepted the award from the United States Congressman Judy Chu (pictured right). 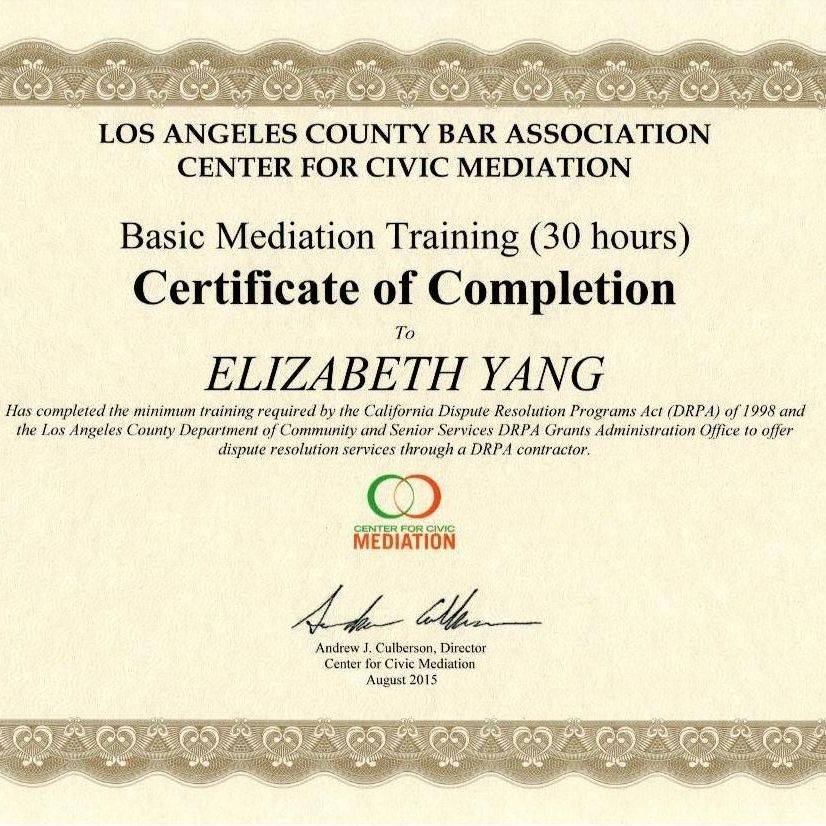 Mediation training is a 30-hour program offered by the Los Angeles Bar Association. The course is intended to provide a strong foundation in mediation skills and introduce alternative ways to resolve conflict.

“As an attorney, conflict is inevitable,” Yang said. “The conflict resolution skills that I have gained through the mediation course will allow me to better serve the clients of Yang & Wang P.C.”

Elizabeth Yang is an accomplished attorney and entrepreneur. She is experienced in many areas of law such as intellectual property, business litigation, and family law.

The meeting was centered on global IP issues and featured several top attorneys in addition to IP Attachés assigned to China, India, Brazil, Mexico, and Russia, among others. Key issues that were discussed included IP rights and enforcement in China, international trade secret protection and the future of global IP challenges.

“It was an honor to be able to attend – these issues are relevant in not only a local context but a global one as well,” Yang said. “As the world gets smaller, intellectual property is becoming an extremely important concept that extends beyond borders.”

The IP Attaché program consists of a group of intellectual property experts that represent the USPTO out of U.S. embassies overseas. 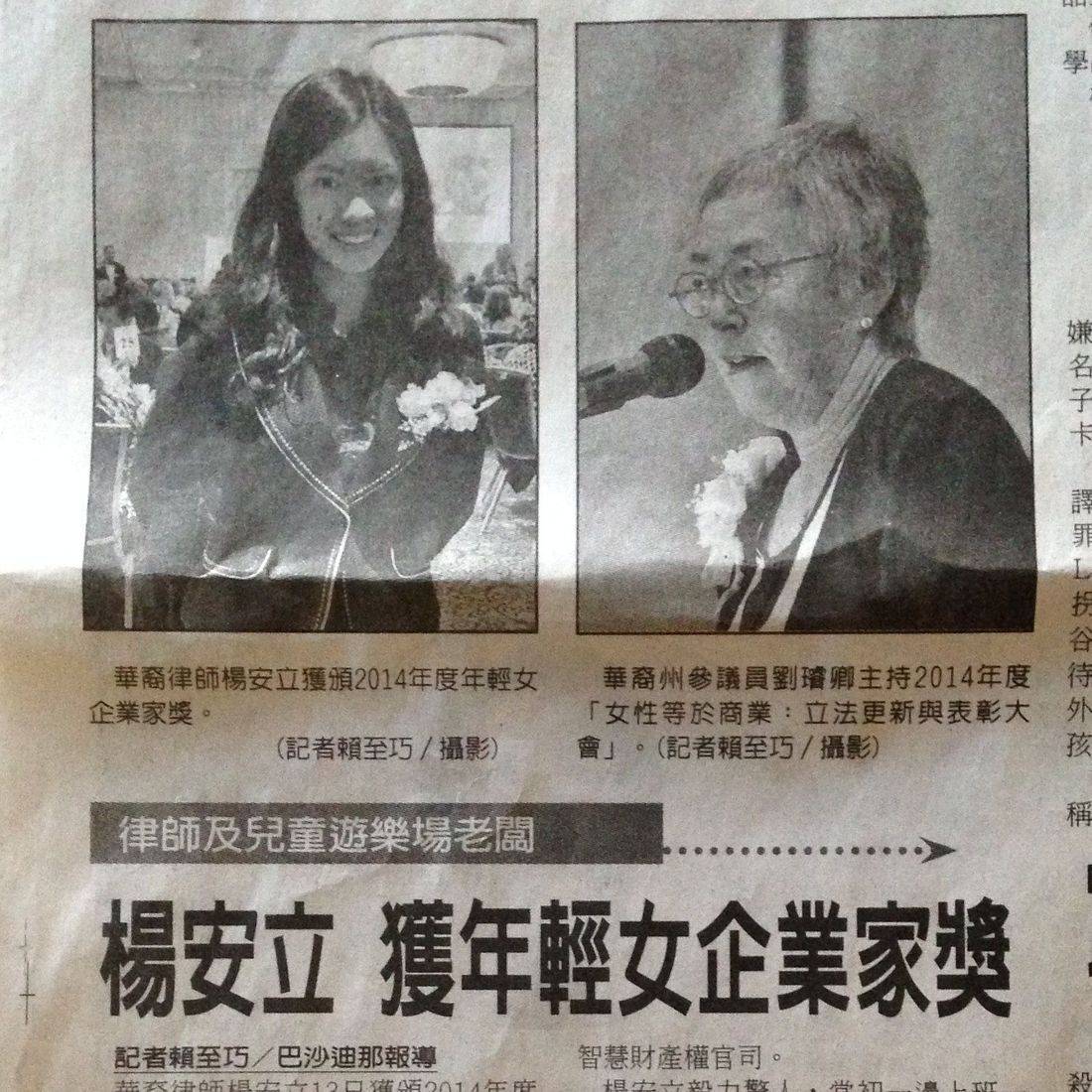 Founder Elizabeth Yang was awarded the 2014 Young Female Entrepreneur Award on June 13 at the annual Women Mean Business: Legislative Update and Awards Luncheon in Pasadena. Yang received the award from State Senator Carol Liu in recognition of her outstanding achievements in the business world.

Every year, the Women Mean Business General Assembly attracts over 500 entrepreneurs to participate in an event that celebrates their contribution to business, politics, art, technology and community service.

Being both an Asian American and a woman, Yang represents two minority groups as an exemplary professional. She encourages all Asian American women to not give up hope and that “dreams will come true if you work hard at it.” –Elizabeth Yang

Yang was born in the United States to Taiwanese parents. She graduated from the University of California, Berkeley with a bachelor’s degree in Electrical Engineering/Computer Science (EE/CS), and worked for six years at the Raytheon Company as an electrical engineer designing radar systems for the B2 Bomber.

Yang later developed an interest in the legal field and decided to go to law school. During law school, she would wake up at 4:30 AM, get to work at 6:00, leave work at 4:00 PM, and rush to her 6:00 PM classes. The candle burnt at both ends for four years.

Yang is now the founding partner of the Yang Law Offices and patent attorney, specializing in intellectual property law. 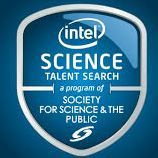 Founder Elizabeth Yang has been selected as Grand Award Judge for the 2014 Intel International Science and Engineering Fair. The Fair will be held from May 13 – May 14 in the Los Angeles Convention Center.

Intel ISEF is the largest international pre-college science competition in the world and Yang will judge the Electrical and Mechanical Engineering category.

Millions of high school students around the globe compete to enter Intel ISEF with over 1,700 fellow student scientists. The Fair provides an international platform for these students and their work.

Yang will join the group of experienced scientists, researchers, and engineers chosen to judge the science projects this year. The judges will evaluate projects based on creativity and the presentation/interview. Numerous awards, the top award being the $75,000 Gordon E. Moore Award for the Best in Category, will be given to the winning finalists.

Yang is honored to serve as a judge for Intel ISEF, the world’s preeminent science competition. She views her participation as a chance to not only contribute to the Los Angeles community, as the Fair is held in a different city each year, but also to the international scientific community, as Intel ISEF contestants represent over 70 different countries, regions, and territories.

Yang further values this opportunity to remain involved in the science and engineering field. Just last month, she volunteered as judge for the 2014 California State Science Fair. 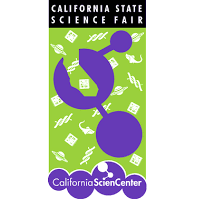 Intellectual property attorney Elizabeth Yang has joined a distinguished group of professionals serving as judges for the 2014 California State Science Fair on Tuesday, April 29, 2016, at the California Science Center. Yang will judge the Materials Science category.

The science fair brings together the best science fair projects from middle school and high school students across California, as well as over 300 scientists and engineers as judges. The judges will award points for projects based on originality, comprehension, organization and completeness, effort and motivation, and clarity. Segments of the science fair and the Award Ceremonies will be open to the public.

Prior to her legal career, Yang worked as an electrical engineer designing radar systems and as a team member for the NASA Jet Propulsion Lab.

“This is a rewarding way for me to remain active in the Los Angeles community and involved in the field of science and engineering,” Yang said.