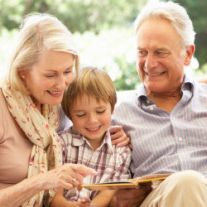 Traumatic events such as death or divorce can cause a strained relationship between a grandparent and a grandchild. Sometimes, parents challenge visitation laws, claiming that grandparent visitation laws infringe on their constitutional right to raise their children. If one or both parents deny you access to your grandchildren, it is important to know how to restore your visitation rights.

In order to prevent complications, communication between the grandparent and the parents should be open at all times. Family counseling is a viable option to sort out any disputes between family members. In some cases, parents realize later on that it might be best for the grandparent to have a part in their child’s life. Mediation is one of the best options for both parties to come to an agreement in the best interest of everyone.

It is best for your family to keep the dispute out of court, but a court battle may be unavoidable. In California, grandparents can ask the court for reasonable visitation rights. Building a strong and healthy relationship with your grandchild is important. When making a decision, the courts will take the relationship that the grandparent has with the grandchild into consideration. If the parents try to cut all lines of communication, document your attempts to reach your grandchild. These records may be helpful when meeting with an attorney.

A grandparent who wants rights to visit their grandchildren can file a petition in court. Courts will make a decision on the petition based on what is best for the child. If there is already a family law case between the parents of the children, the grandparent may ask for visitation rights in the existing case. However, if there isn’t an existing case, filing a petition from scratch may be an extensive process.

In order to establish visitation rights, the grandparent must submit proof that there was a good relationship between the grandparent and child. Some states require proof that denying visitation rights would cause “real and significant harm” to the grandchild. If you are a grandparent that is raising your grandchildren because their parents are unable to or are absent, it is possible to file for custody of the children. This is called establishing guardianship which is a separate court process.